Who Will Buy Baby Boomers’ Homes When They Leave? 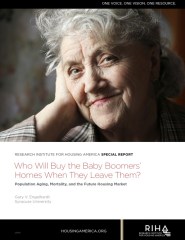 A new report form the Mortgage Bankers Association says aging Baby Boomers number an estimated 32+ million people and represent nearly 41% of all homeowners.  Their report asks a critical question;  Who will buy the Baby Boomers homes when they leave them?  They suggest that the aging & eventual death of such a large population cohort will have a major impact on the housing market.  The report takes a deep-dive into an assortment of data that includes housing, aging, and mortality.  To that end they examine the extent to which this demographic shift may affect the supply & demand of homes for sale by “older Americans” – which they define as individuals and households with headed by someone 50+.  There is a lot of interesting and important data in here.

“In 2019, there were 2.6 million deaths of persons aged 50 and older. One million of these were renters. Of the 1.6 million decedents who lived in owner-occupied housing, a half million were the first-to-die spouse in a couple and transferred ownership to the surviving spouse. The remaining 1.1 million died as homeowners and bequeathed their homes. Therefore, the supply of homes for sale from the mortality of older Americans was 1.1 million units in 2019.”

The post Who Will Buy Baby Boomers’ Homes When They Leave? appeared first on Real Estate Investing Today.

« The median price for a single-family home in Mass. breaks $600,000 for the first time
Mass. is ranked among top 10 states for collection of property tax revenue »