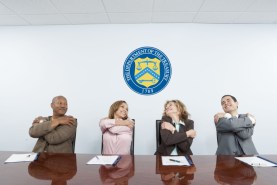 As if to quickly to pat themselves on the back, the U.S. Treasury Department says more than $ 1.5 billion in rental assistance was delivered to eligible households in the month of June, more than the assistance provided during all three previous reporting periods combined.  However, data reveal that of the $ 46 billion made available to the Emergency Rental Assistance Program, less than $ 3 billion has been spent.  Treasury says this represents “significant progress,” but they acknowledge that there is still much more to work do.  Indeed…

“While more households are getting help, in many states and localities, funds are still not flowing fast enough to renters and landlords. Treasury is continuing an all-out effort, in coordination with the White House and interagency partners, to get the word out about the availability of rental assistance and to support grantees in ramping up their efforts.”  U.S. Department of the Treasury release.

“It is only the federal government that could praise a failing system which has failed to release less than 7% of FREE rental assistance over 6 months to people owing over $ 45 billion in past due rent and at risk of eviction!  Considering some programs have yet(!) to release any funds, the federal government needs to step up by pushing best practices and remove disincentives: there is a contra-incentive, that funds NOT spent from the second tranche of $ 21.5B can be kept by the inept programs.  Let’s face it, the government is so inept they cannot give away money!”  Said Charles Tassell, COO of the National Real Estate Investors Association.

Click here to read the full release at the U.S. Department of the Treasury.

Click here for Emergency Rental Assistance – How to Apply State by State.