According to ATTOM Data’s latest U.S. Home Flipping Report, home flipping nationwide increased to a 14-year high in Q1 of 2020, while returns dropped to a nine-year low.  ATTOM says there were 53,705 single-family homes & condos flipped in Q1, representing 7.5% of all home sales during the quarter, reaching the highest level since Q2 2006.  In addition, they said the gross profit on the typical flip also increased in Q1, to $ 62,300, up slightly from $ 62k in Q4 2019. However with rising home prices, that profit translated into a 36.7% ROI – the lowest level for home flipping since the Q3 2011.

“Home flipping has gradually taken up a larger portion of the housing market over the last couple of years. But profits are down and are lower than they’ve been since the dark days following the Great Recession, which is a sign that investors aren’t keeping up with price increases in the broader market,” said Todd Teta, chief product officer at ATTOM Data Solutions. 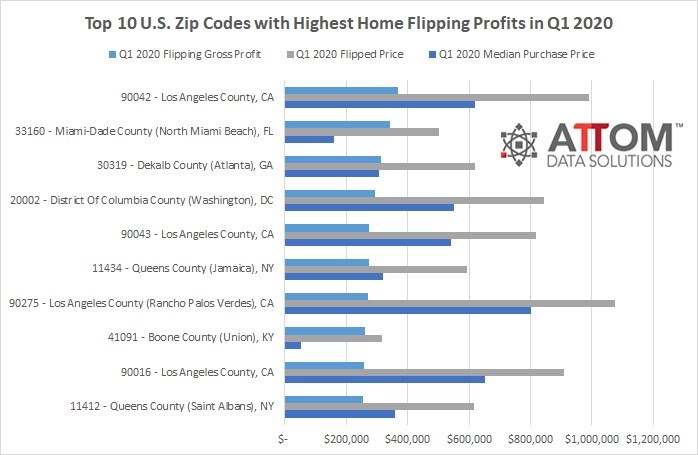 Click here to read the full report at ATTOMdata.com.

« This Lenox Great Estate has hit the market for $5.9 million. Take a look inside.
Existing-home sales in the Northeast plummeted in May »