San Francisco’s Sh*tuation is Out of Control

This is one of those stories that is hard to believe until you actually read about it.  Apparently, the public defecation problem has gotten so out of hand, so extraordinary,  in San Francisco that interactive graphs and charts have been produced to highlight its seriousness.   So bad in fact, as apartment-search site RealtyHop and other media outlets have reported, SF’s city government launched the Poop Patrol program to proactively mitigate the “shituation.”  You can’t make this stuff up.  Indeed…..Take a look at this mess:

“…every city has a dark side, and San Francisco is no exception. San Francisco, as small as it is, is covered by poop – dog and human poop…” 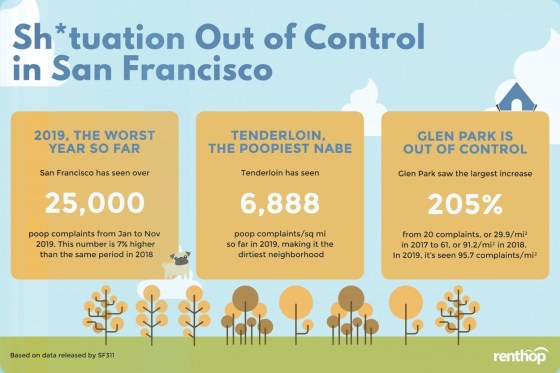 RentHop:  The interactive map above illustrates the poopiness of all San Francisco neighborhoods. The darker the shade, the more animal/human waste complaints in that neighborhood. Note that to properly compare each neighborhood, we first removed duplicates by date and location and then normalized the incident count by land size.

Click here to read the full story at renthop.com.

The post San Francisco’s Sh*tuation is Out of Control appeared first on Real Estate Investing Today.

« This Allston development, one of the neighborhood’s largest ever, just won a key approval
Listed: For under $900,000, a ski-in, ski-out log cabin in Maine »