Redfin says that small towns and rural areas may be set to boom in the wake of the Coronavirus pandemic as homebuyer interest in America’s less populous areas saw a surge in March.  Interestingly, their data show that pageviews of homes in rural areas & small towns were up 115% and 88% respectively, however, pageviews for homes in urban metro areas (with populations > 1 million) decreased 10% over the same period.  They do point out that the spike in interest in rural areas has not yet translated into an increase in actual sales, but the decline in pending sales has been less dramatic in rural areas and small towns (down 20% and 11%, respectively) than in large urban areas (down 26%).  Indeed…

“Based on what we’re seeing in the data so far, it looks like the housing market in rural areas and small towns will weather the storm through coronavirus shutdowns better than the big cities. We may also see an increase in home sales in these less densely populated areas in the long term as well, as homebuyers look to get away from the cities or just purchase a second home that they can retreat to when times in the city get rough.” 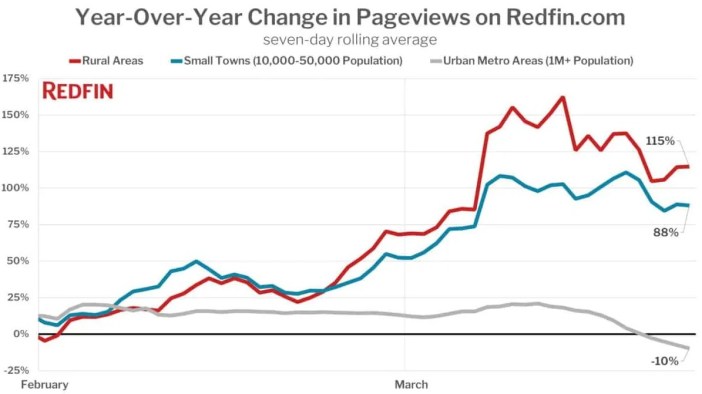 « 12 homes for sale you can tour from your couch
Your Invited! Boston Globe Business Reporter Jon Chesto to Speak About COVID-19 »