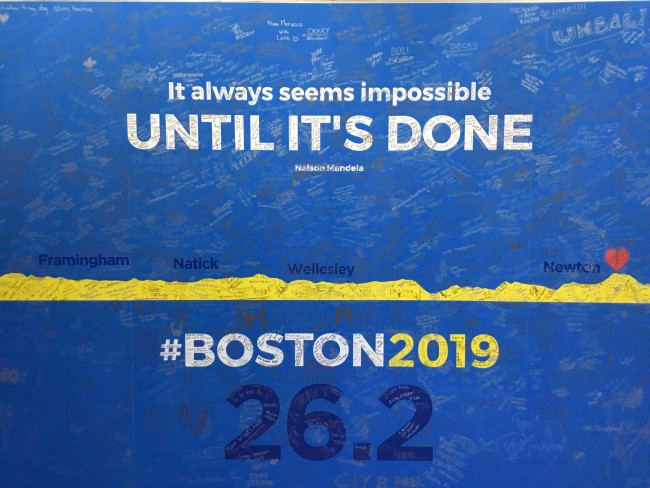 Two weeks before race day, began thinking of the Boston Marathon as a metaphor for another marathon with a historic starting line in Boston. Those who have run any distance know the preparation, persistence and pacing it takes to finish the grueling 26.2 mile course. Runners build their stamina over years, and sometimes include quarter-mile speed work in their workouts so they have kick left to finish strong — like this Boston Marathon men’s winner. That’s also the case for fellow real estate consumer advocates who turned in their best performance ever during the first three months of this year, 1Q2019.

Twenty-six years and two weeks ago, a group of real estate consumer advocates gathered in Boston for an event that we did not know would become a marathon. The original Consumer Revolution in Real Estate was pre-internet; and over next two days, we discussed addressed anti-competitive practices in the industry that extend into today’s headlines. Keynote addresses were delivered by two leading consumer advocates, Ralph Nader and Steve Brobeck, recently retired head of the Consumer Federation of America.

A week ago, 150 innovators and real estate insiders gathered in Palm Springs to discuss where the industry would be in five years. Wonder how many of their conversations reflected our belief that 1Q2019 was the best quarter ever for real estate consumer advocates and the homebuyers / sellers we serve! Here are 10 bullet points to substantiate that claim:

1. The quarter began with a warning that the class action lawsuit against designated agents in New York could have serious implications to the industry;
Join / share working group?
http://bit.ly/DesignatedClassActionNY_1Q2019

2. After a decade of being on the sidelines, Steve Brobeck of the Consumer Federation of America followed up his presentation at the FTC / DOJ’s 2018 hearing on barriers to innovation in real estate with The Agency Mess, a report on fiduciary duties in real estate. At one point, it had generated major stories inside and outside the industry:
Join / share working group?
http://bit.ly/DeconstructAgencyMess_1Q2019

3. Sensing an opportunity to take action to address the mess, the Minnesota Association of Realtors tried to introduce corrective legislation. The attempt to package designated agency as the cure for dual agency was thwarted by real estate consumer advocates led by Doug Miller of http://CAARE.org, and the legislation was defeated in committee.
Join / share working group?
http://bit.ly/DefeatedDesignatedMN_1Q2019

6. While some industry pundits predict that iBuyers could account for 40-60% of real estate transactions within a matter of years, real estate consumer advocates in Massachusetts have been invited the Mass Board of Real Estate to discuss regulatory issues raised by iBuyers. Meanwhile these billion dollar shapeshifters are using listing presentations to make CASH offers before properties are listed in the MLS.
Join / share working group?
http://bit.ly/iBuyersMABoardRE_1Q2019

8. Leading real estate brand consultants are writing about the industry’s day of reckoning, but there’s mention of the consumer victories above! Instead, they’re warning that iBuyers will “drive the industry into an intense Darwinian era” where only the fittest will survive.
Join / share working group?
http://bit.ly/wREckoning1Q2019

9. Last year, the invitation-only group of elite real estate executives and innovators that retreated into the desert to Disconnect, published the Parker Principles — 10 steps to make the industry more consumer-centric. It’s not clear how that work product was reflected in this year’s event, but it appears that the event was focused on helping agents survive rather than helping real estate consumers save BILLIONS in coming years.
Join / share working group?
http://bit.ly/DeconstructDisconnect_1Q2019

10. In contrast, when real estate consumer advocates asked in 2015 what would the real estate ecosystem would look like in five years, we launched RE2020 — an open, collaboration platformed dedicated to cocreating a money-saving real estate ecosystem capable of delivering $ 30 billion annually in consumer savings by the year 2020. The long-overdue reforms above will help us reach that goal.
Join / share working groups?
http://RE2020.Loomio.org

The progress above does not include advances made by the affordable housing advocates, including calls to tax luxury real estate transactions to address affordable housing and climate change; calls to revive rent control, and tenant protections — including legal assistance to low-income tenants facing eviction.
Join / share working group?
http://bit.ly/REJusticeTAX

Instead of inviting industry elites to retreat into the desert, RE2020 invites real estate consumers and fellow innovators to move into the future. Our approach is to invite multiple stakeholders, not industry insiders, to address systemic problems that impact all of us and cocreate a money-saving real estate ecosystem that serves us all. Want to join us, or know anyone who should? Here’s a good place to start if you want to use Holy Week / Passover to catch-up with other marathon runners and see how far we’ve come.

Nationally, a second major class action lawsuit is targeting real estate commissions. What are implications for both suits? Industry observers are saying “… winners would be brokers “who are willing to innovate.” RE2020’s take is that it will be real estate consumers, homebuyers and sellers, who will save BILLIONS annually. It’s taken a marathon-like effort to reach that goal, but the finish line is in sight.