July 21, 2020 – The slowing of consumer spending (which accounts for 70 percent of the economy) is usually a leading indicator for a recession. For this recession there was no lead time at all; spending plunged when businesses shut down and employees were let go. Back in the 2008 recession, retail sales eventually dropped 10 percent, this time they bottomed out at 20 percent.

But this time the recovery in spending has been fast. The chart shows that retail sales in June, to my surprise, were almost back to even. That’s partly because on-line sales took off, partly because unemployment support has been generous, and partly because of stimulus checks; the government stepped in to help. 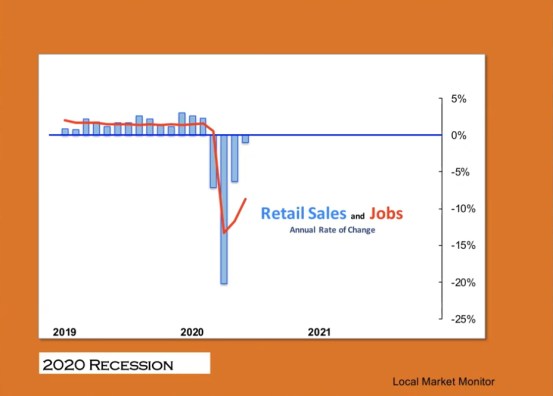 What will happen without further government help is a big question, especially as some parts of the country have to step back their reopening plans. There are still 9 percent fewer jobs than last year, and rents and mortgage payments can’t be deferred much longer.

I think we’ll have a two stage recession: a fairly rapid bounce that still leaves us in negative territory, followed by a slow recovery of the rest that goes well into next year. More people will be in debt, many people will remain unemployed, and income inequality will increase.

The overall job loss in June (compared to last year) was 9 percent, including 6 percent in manufacturing, 8 percent in retail, 7 percent in business services, 4 percent in healthcare, just 1.5 percent in finance, and 24 percent at restaurants. Ominously, job losses in government increased to 6 percent; tight government budgets will be the norm for years.

« 12 homes you can tour from your couch (July 22)
Gov. Baker Extends Eviction and Foreclosure Moratorium To October 17 »