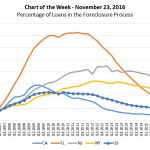 Just Under 2% of all Mortgages in Foreclosure

According to the Mortgage Bankers Association, as of Q3 2016, 1.55% of all mortgages nationwide were in some stage of foreclosure.

States such as Florida and California saw foreclosures increase early in the crisis but they have fallen steadily since their peaks with foreclosure inventory rates down to 2.48 percent and 0.60 percent, compared to highs of 14.49 percent and 5.83 percent, respectively. It took Florida a few years to work through its judicial foreclosure backlog and the sheer size of the foreclosure stock, but since 2012, the percentage of loans in foreclosure has fallen quickly as its local housing markets have recovered.   New York and New Jersey saw later peaks in terms of loans in foreclosure, due to different market dynamics. However, neither state has improved as quickly as Florida and California.  Both New York and New Jersey are judicial foreclosure states, which have longer foreclosure timelines, and their economies and housing markets have lagged other states in general. 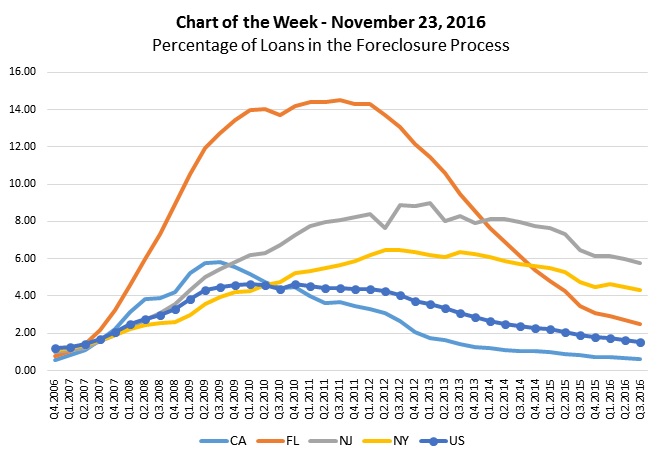 The post Just Under 2% of all Mortgages in Foreclosure appeared first on Real Estate Investing Today.

« Top Cities for Thanksgiving
Most Children Live With Two Parents »