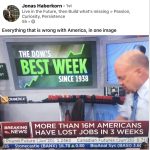 “Everything that is wrong with America, in one image” that stark assessment of the image above is underlined by a prophetic comment on the original post:

”That’s what happens when you manipulate the markets, at some point that divergence will play out and it’s gonna be ugly.”

Seasoned real estate professionals have seen what ugly looks like.  At the start of the last decade, nearly one in four households were upside down on their mortgages but by mid-decade 60% of sales in some overheated housing markets were involved in bidding wars (including one in four $ 100K over asking price in Cambridge, Mass during June 2016).  Surprisingly three months EARLIER, rising interest rates and changing economic conditions (click to see St. Louis Financial Stress Index) caused the publisher of a leading agent-to-agent Facebook Group to disclose:

That anxiety was expressed four years ago but might reflect what some insiders are fearing or admitting behind closed doors.  In fact yesterday, the moderator of Facebook Live with NAR quipped “Many of us are already referring to 2019 as the ‘Good Old Days.’”

According to the National Associaton of Realtors, one-in-three real estate agents has less than two years experience (insert link), so they’re not likely to recognize or admit that the housing market was overheated and overdue for correction before the pandemic.  Several times in the past four years, the real estate market has been at a tipping point only to be rescued by reduced interest rates that artificially increase purchasing power.  The last caused purchasing power to rise by 15%, triggering the median price of pending condo sales in Massachusetts to surge 13.6% this March.

Despite assertions that “the last recession in 2008 and 2009 caused but a maybe months-long blip in the local housing market,” (insert link) more than 16,800+ articles crowdsourced on BostonBubble starting in 2005 documented otherwise.  One of the most recent reminds readers that the Fed once warned that recessions can and do change prices abruptly; and significantly, leaders in the Greater Boston Real Estate Board cautioned that local prices may have peaked in 4Q2019:

Warning two weeks ago of a “record-setting recession” caused by Covid-19, a Wells Fargo economist cautioned that the housing market has gone “From full throttle to sudden stop.”  Looking back on this time of unprecedented uncertainty, history will ask — as Boston-NPR affiliate @OnPointRadio did this week, “What [Do] We Owe to Each Other?”

Hope that real estate and mortgage professionals who have been through previous boom / bust cycles agree that level of risk being revealed daily — from the head of the Boston Fed warning that prices could fall 4%, to the St. Louis Fed warning that unemployment rise to over 30% unemployment, to the press out of the UK about sales falling 80% demands an emergency response — an Emergency Transparency Act.

As a buyer’s agent with a national track record as a consumer advocate would argue that homebuyers, and by extension taxpayers, have rights that need to be protected particularly during this crisis:

1.  The Right to Transparency

To protect them from overpaying, there should be a ban BLIND #BiddingWars;

3.  The Right to Make Informed Decisions

To end asymmetric access to information, reveal the amount of accepted offer on pending sales.

Most Realtors will scoff at the proposed Emergency Transparency Act because the industry has a seller bias that’s so ingrained they failed to recognize the long overdue need for a Homebuyer Bill of Rights.  However, taxpayers who guarantee loans should demand otherwise.  The pandemic compells us to put the common good before a rigged system designed to maximize profits for homeowners.

If we’ve learned anything from the last recession it’s that 13% price increases like the one in March are unsustainable — or worse are “dumb money.”  Let’s be prudent and protect homebuyers with Emergency Transparency Act to make sure they don’t end up upside down again.

Invite discussion on Twitter or other social media, please use hashtag: #RETransparencyAct and share this link via social media: