According to ATTOM Data’s latest U.S. Foreclosure Market Report, there were 156,253 U.S. properties with a foreclosure filing, representing a 42% increase from Q4, 2019.  However, Q1’s number is 3% lower than one year ago.  In addition, the report says that in March alone there were 46,800 properties with foreclosure filings, down 3% from February and down 20% from one year ago.  Indeed…

“As foreclosure activity across the country continued to decline in March, contributing to a run of quarterly declines, the number of filings remains just one-sixth of what it was following the Great Recession a decade ago,” said Todd Teta, chief product officer at ATTOM Data Solutions. “This latest sign of the strong national housing market, however, comes with a huge caveat because it captures the pivotal month when millions of Americans started losing their jobs because of the economic fallout connected to the Coronavirus pandemic. Banks are temporarily holding off on foreclosures and we expect this will bring foreclosures even lower for at least the next few quarters. However, with unemployment and other distress factors hitting the economy now, the numbers could rise significantly later this year and into next, depending on how many people can’t keep up with their payments.” 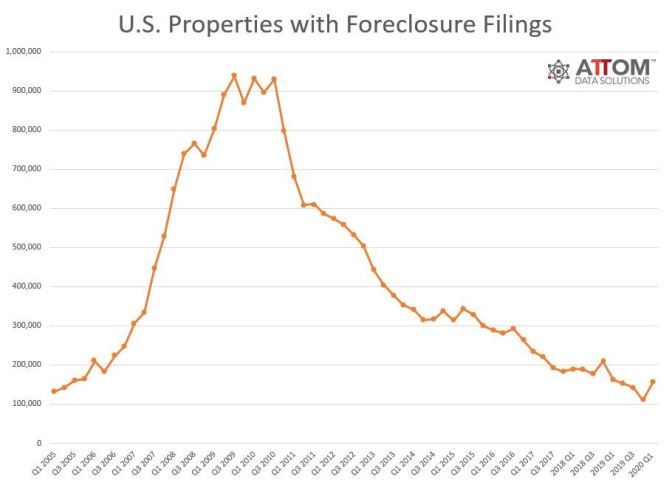 Click here to read the full report at ATTOM Data.

« Short on store-bought cleaners? Use what you have on hand
#Covid_ImpactRE: Is seller bias & lack of transparency misleading homebuyers? »