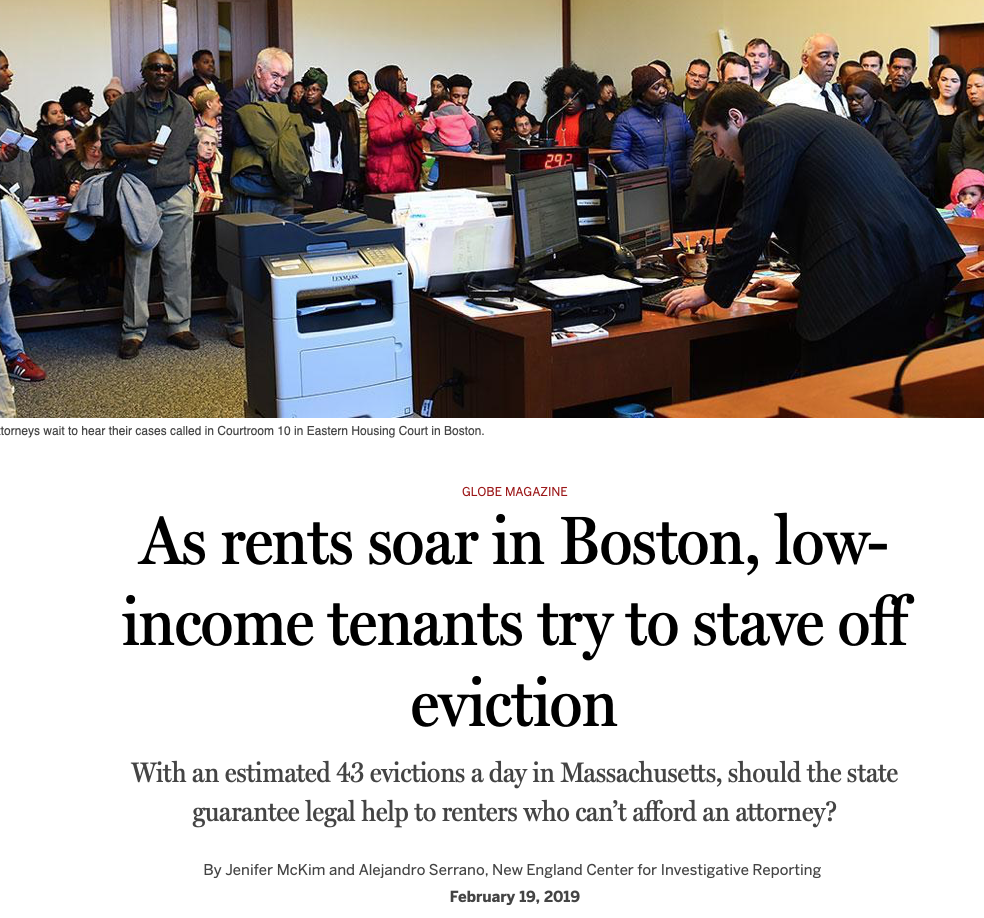 Accurate Court Data Shows The “Eviction Crisis” Is A Fallacy

You may have noticed the featured article in Sunday’s Boston Globe Magazine on the supposed “eviction crisis” in Massachusetts. Titled “As rents soar in Boston, low-income tenants try to stave off eviction,” investigative reporter Jenifer McKim cited inaccurate court statistics to create the false narrative that thousands of innocent tenants are being thrown out on the street by greedy landlords. Using this fallacy, McKim then advocates for a new legislative proposal giving all tenants (but not landlords) a “Right to Counsel” i.e, free legal representation courtesy of the Massachusetts taxpayer. I’m not a fan of the term “fake news,” but it is really justified here. Where do I begin?

McKim first claims that “eviction initiations in Massachusetts spiked in 2008, following the Great Recession. Each year since then, landlords have sued about 40,000 heads of household across the state seeking to evict them, according to data gathered by the New England Center for Investigative Reporting.”

Well, she’s totally wrong and does not know how to read court statistics. Take Fiscal Year 2018 for example. Housing Court publicly available data shows 29,684 summary process cases filed. Summary process is how Massachusetts defines an eviction case. There were about 10,000 other types of cases filed in Housing Court (code violations, search warrants, small claims and civil money actions) but those are not evictions. So she’s already off by 10,000 cases or 25% of her cited data. To the extent she’s using district court filings, one would have to determine whether those were residential or commercial. Commercial evictions are always filed in the district court. Making that important distinction would entail physically reviewing each case file which she didn’t do. So you can’t reasonably rely on that data either.

Second, one would also have to account for Housing Court’s recent expansion to statewide jurisdiction which has increased its filings while district court filings are down. Actually as you can see from the PDF linked above, summary process filings in Housing Court were trending down and level from ’14 to ’15, to ’16 and to ’17, but then slightly up for ’18 (by only 6% or so) because of the statewide jurisdiction enactment. Eviction filings in District Court were down about 10% in 2018. So McKim is being intellectually dishonest if she’s attributing the slight bump in Housing Court filings in ’18 as some sort of trend of increased evictions. The overall trend has been down and level, as you can see below in the chart I quickly created. Sure doesn’t look like a crisis to me… 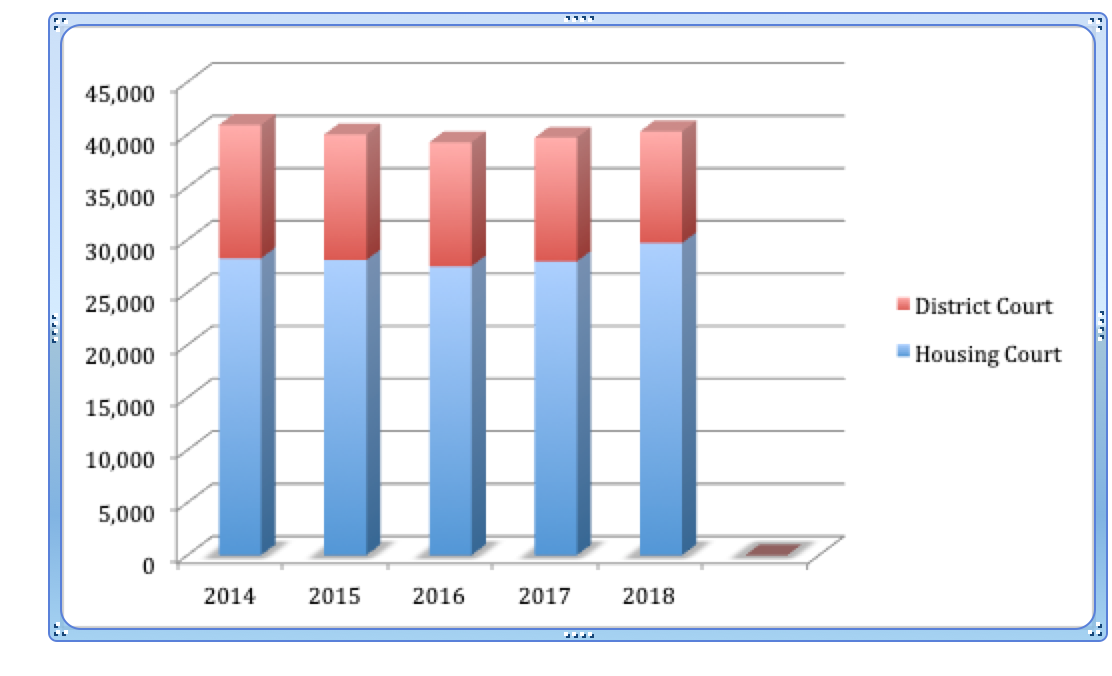 Then McKim makes the most egregious inaccurate statement: “The state doesn’t track how many of these have resulted in actual evictions, but the Eviction Lab at Princeton University found that in 2016, there were roughly 15,708 forced removals in Massachusetts — an average of nearly 43 a day. That’s about double the number of evictions in 2005, before the housing bubble burst…”

This is another totally bogus statistic. She’s right, the state does not track the number forced removals (accurately called a levy on an execution for possession). Researching that would entail physically reviewing every single eviction case in the state — 6 separate Housing Court divisions and in our roughly 80 district courts. Did Princeton University send a small army of interns checking every case file for 2016? That’s the only way they could accurately conclude that there were 15,708 “forced removals,” however they are defining that. So I was curious and did some research. After some digging I found the Princeton Eviction Lab’s Report on Methodology, and no surprise, their researchers relied on online available statistics, and as McKim acknowledged, you cannot see if there was a forced move out from the basic online data. I can tell you that in my 20 years of experience handling thousands of evictions, forced move outs are around 1-2% of all cases. It is the rare exception indeed because it costs landlords no less than $ 3,000 for movers and storage costs. The vast majority of cases are either default no-shows or negotiated move out agreements.

So the truth is that there is nowhere near 43 forced removals per day in Massachusetts, as McKim claims. Not. Even. Close.

Also, the number of evictions has not “doubled” since 2005, as McKim states. In 2005, there were approximately 30,000 total eviction cases filed (and this includes commercial cases which cannot be carved out without reviewing the case files). In 2018, there were about 40,000 total cases filed (again, this includes commercial cases). So McKim is off by 20,000 cases. And of course, the vast majority of all eviction cases are resolved amicably between the parties, without the need for a forced move out. I find it incredulous that highly regarded Boston Globe investigative reporters would be so sloppy with these critical statistics which are publicly available online.

Lastly, Ms. McKim interviewed me for a solid hour on this story, but only used a small snippet of my extensive commentary on the issue, pertaining to how I’ve been physically threatened by tenants in Housing Court. Yes unfortunately this is true. But I’ve been practicing in the Housing Courts for 20 years now and I gave her a small treatise of information which she ignored for her article. Ms. McKim also extensively interviewed Doug Quattroci, the Executive Director of the largest trade association for landlords, MassLandlords.net. Mr. Quattroci has led our lobbying efforts to level the playing field for landlords and offered extensive data on the topics Ms. McKim was writing about. None of Mr. Quatrocci’s comments made it into the article. Contrast that with paragraph upon paragraph dedicated to the tenant side of the story. I e-mailed Ms. McKim about all of these inaccuracies and her response was “feel free to write a letter to the editor.” I gave her an “LOL” on that one!

Ms. McKim’s article was certainly not fair and balanced, in my humble opinion. I guess we can’t expect that from the Boston Globe these days, can we? How sad.